Then v. Now: 7 Major Changes Since the TCPA Passed in 1991 [Infographic]

In 1991, the Soviet Union still existed, gas cost $1.12 a gallon, and the Internet had a whopping one million users. It was also the same year that Congress passed the Telephone Consumer Protection Act. Technology has undergone changes that would have been unthinkable then. Understanding the TCPA, however, requires understanding the difference between the technological landscape of 1991 and the technology of today. Given the rate of technological change, the TCPA doesn’t always fit today’s technology. But guess what? It’s still the law and you can feel its effects even if you continue to wear shoulder pads with your suits and have those vintage velour tracksuits in your closet.

Too often, we see our fellow defense counsel defending TCPA cases in a proverbial vacuum by failing to educate the court about the important historical context in which the TCPA was enacted. Painting that longer view is critical to helping the court understand how this 1991 law should be applied today.

Seven major changes since passage of the TCPA:

This infographic helps illustrate a few of the changes outlined above: 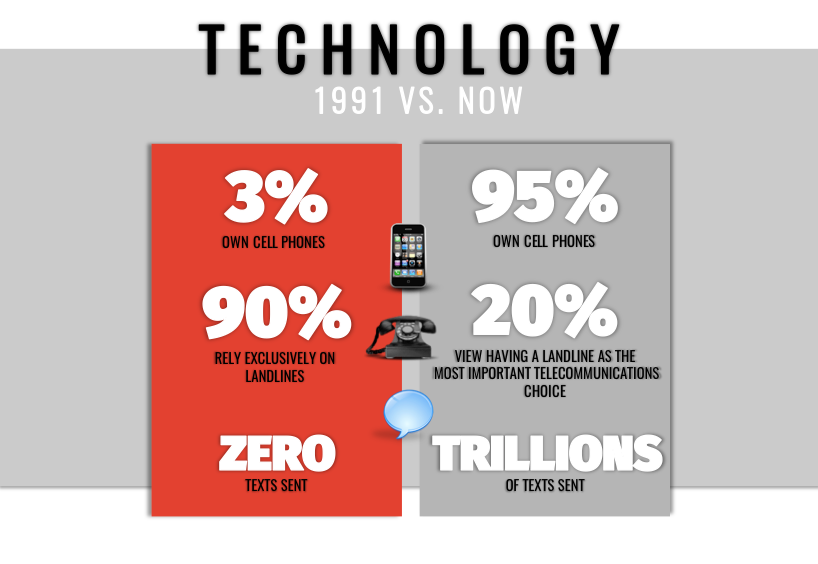 It's safe to say (as you read this blog on your mobile phone), that the technological changes of the past twenty-six years are important. While the concerns created by the technology landscape of the 1980s helped shape the contours of the TCPA, they are not as relevant today. The TCPA is still with us even though clunky cell phones with large antennas, expensive calling plans, and the big hair of the ‘80s are long gone. Understanding and adapting to the TCPA also requires an understanding of the problems that Congress tried to solve in 1991.

Of course, the TCPA has been amended and supplemented through FCC orders and regulations and court rulings since 1991. For example, the National Do Not Call Registry was created in 2003, followed by the Junk Fax Protection Act of 2005, which amended the rules against “blast faxes.” And the D.C. Circuit, as you may have seen, is expected to rule in the near future on the FCC’s now-infamous 2015 Order interpreting the TCPA. 2015 Declaratory Ruling and Order.

Notwithstanding these legislative, regulatory, and judicial efforts to keep the TCPA current, the technological changes in the telecommunications industry have been so rapid and revolutionary that what made eminent sense in the early 1990s might not fit today’s technology and communications. Given these changes, it is important to have guidance from experts who understand not only where the TCPA is today but also where it came from. You can download our TCPA Survival Guide: The Rules Edition for more information.

Master the TCPA Fundamentals with our TCPA Survival Guide: The RULES Edition